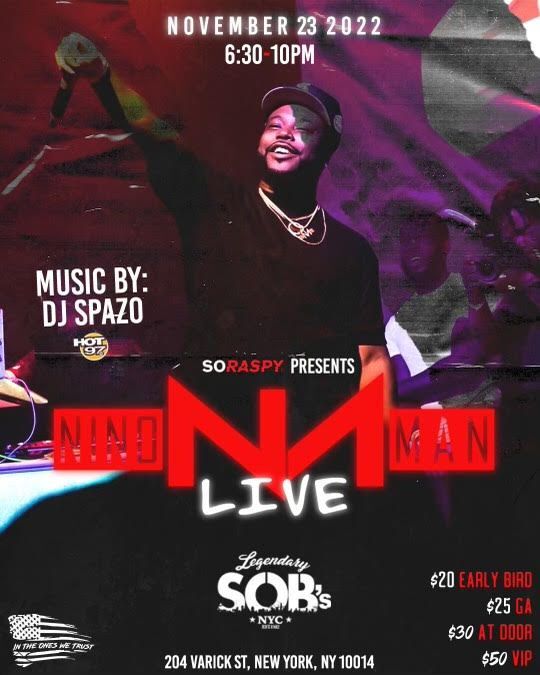 Nino Man takes the S.O.B.’s stage in NYC on November 23rd, with music by DJ Spazo!

Smiley Abney also known as”Nino Man” was born in Harlem, NY. At the age of eleven, Nino fell in love with hip hop. Listening to rap icons such as Fabolous, Jadakiss and Eminem inspired Nino, allowing him to envision himself as a “Hip Hop Legend”. Although he had great aspirations, aspirations just weren’t enough.

With dedication and focus Nino Man continued to make music using his life as an example which made him hungry for success. During this time he had hit collaborations with French Montana and Jadakiss. This was just the beginning Nino Man continued to make music, With Jadakiss co-signing his music In 2019 Nino Man dropped his EP Juu Hurd, featuring tracks with Lil Tjay & Jim Jones, which currently has over 3 million streams and counting. More recently Nino Man’s “What I Need” challenge went viral on social media. Nino has also released tracks with Dave East, Jadakiss, Styles P, French Montana, and the list goes on. He was also featured on Styles P’s 2019 album S.P. THE GOAT: Ghost of All Time, and Jadakiss 2020 album Ignatius.