Scrilla LCF is an impressive independent talent with a hot song on his hands. His latest single, “Time” is a high-energy, no hook banger with an infectious bass-heavy beat that hits just as hard as Scrilla’s deep baritone vocals and rapid-fire flow. The bars are tight, the production is crisp, and the accompanying music video is fun and well-executed.

Scrilla’s captivating flow feels familiar and fresh at the same time – combining the best elements of a Brooklyn drill rapper like Bizzy Banks with some of the southern tones of artists like Moneybagg Yo or DaBaby – to create a really successful, fresh sounding hybrid.

One of the most unique aspects of “Time” and Scrilla’s music in general, the notable absence of cuss words. “Time” goes so hard that 9/10 people on the first listen won’t even notice the lack of explicit language. Why no cursing? Well, the first time Scrilla went to the studio with his older cousin at 14 years old… his mother insisted on being there too. Not one to curse in front of Mom, he quickly rewrote his profanity-laced verse. When he recorded the cleaned-up version he realized he could make a dope song without it, and from that day forward never cursed on a record again.

While cursing has definitely become part of the art form, it’s certainly refreshing to see an artist steer clear while still creating seamless, hard-hitting tracks that don’t sound out of place at all. He’s even got the radio DJ’s fooled – when they instinctively ask for the clean version he always gets a kick out of telling them that they’ve already got it. So avoiding curse words also means that listeners will get to hear his music the way it was intended to be heard every time – without any bleeps or dubs. 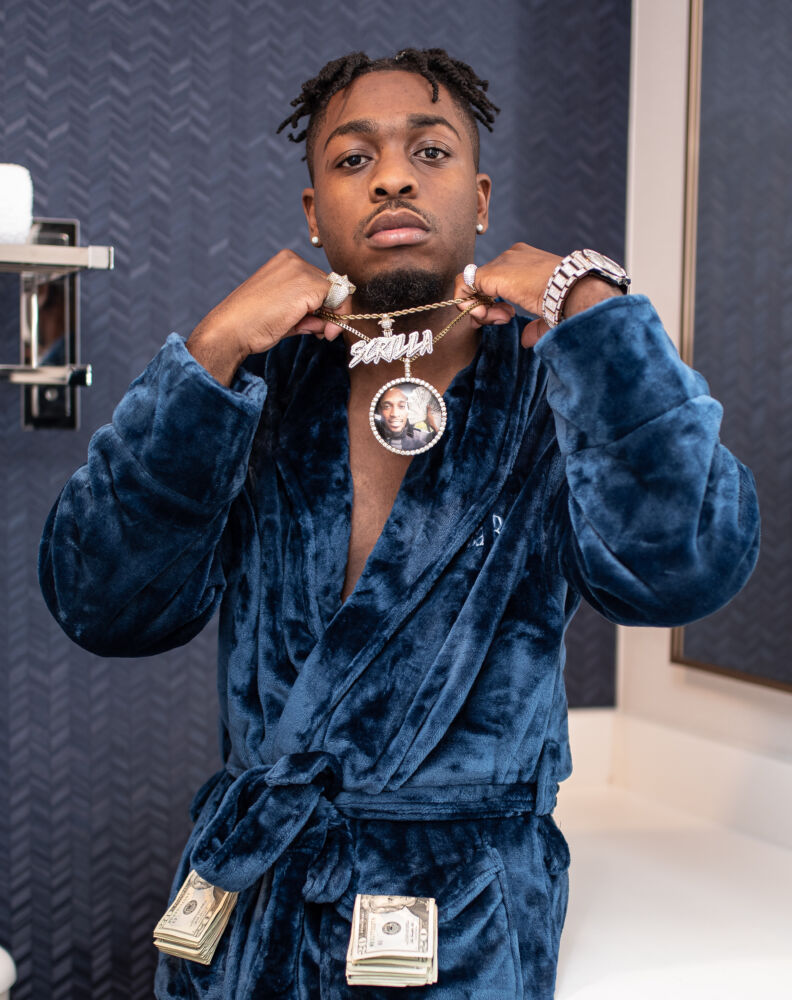 Scrilla was originally born in Crown Heights, Brooklyn before moving to PA in his teen years. He first started putting out songs on Soundcloud in 2017, where he’s amassed his biggest numbers so far. The first track to start catching people’s attention was “Designer” – quickly racking up over 1M plays on and sitting at over 1.5M today. Other early tracks like “Universe” and “Reflections” feat. Zay Hilfiger were well received on SoundCloud. His early success caught attention. In return various labels and artists, allowed him to start brushing shoulders with different industry players. Eventually leading to performance opportunities in 2019, including at the legendary SOBs, alongside some big names including Lil Durk and YNW Melly.

After taking some time to hone his sound and build up his back catalog, Scrilla is back with and fully focused on his new single “Time.” After dropping earlier this year on SoundCloud, the track has taken on a second wind with the release of the music video and introduction to DSPs this fall. The high energy single is accompanied by a fire visual depicting all kinds of lakeside activities, interspersed with some lit pre-corona concert footage. The track has been seeing a great response – attracting a fair bit of attention and getting shown love from industry artists like Lil Loaded, Desiigner, DJ Drewski, Jim Jones, and even Mr. Viral himself, Fivio Foreign.