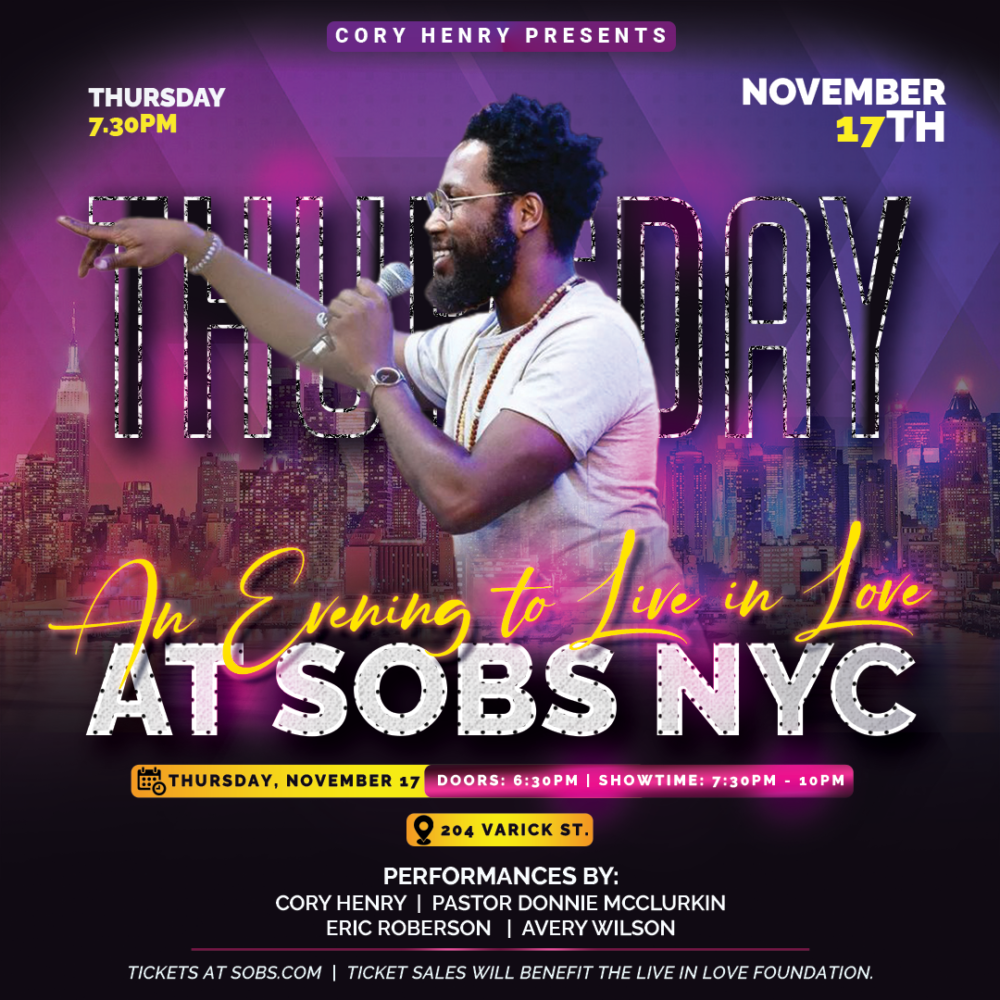 Cory Henry presents an Evening to Live in Love

One of the major figures in gospel music in the 21st century, Donnie McClurkin occupies a territory that lies somewhere between the modern gospel of Kirk Franklin, the gospel soul of Andraé Crouch, and the contemporary traditionalism of Marvin Winans. McClurkin owes a significant personal and professional debt to Winans, as he served as an associate minister at Marvin’s Perfecting Church prior to establishing his own Perfecting Faith Church in Freeport, New York, in 2001. By that point, he had one hit record under his belt — an eponymous 1996 set for Warner Alliance — and the Perfecting Church served as a foundation for McClurkin to not only build upon his musical career but to expand into television and film.

Raised in Amityville, Long Island, Donnie McClurkin saw his fair share of trauma as a child. At the age of eight, he lost a younger brother in a hit-and-run accident, leading his parents to send him to a relative’s house while they mourned. There, he was sexually abused by an older relative. The combination of these two events led McClurkin to turn to the Lord at an early age, devoting himself to worship at the age of nine. An aunt sang with Andraé Crouch and, inspired, he formed the McClurkin Singers while he was an adolescent. He would form the New York Restoration Choir, which recorded an album called I See a World, before he headed to Detroit to be an associate minister in 1989.

While serving as associate minister, McClurkin signed with Warner Alliance, which released his self-titled debut in 1996. Featuring the hit “Stand” along with “Speak to My Heart,” revived from the New York Restoration Choir record, Donnie McClurkin turned into a hit, winning a Grammy for Traditional Soul Gospel Album and earning Dove Award nominations; it would later be certified gold. This helped establish McClurkin as a star in his own right, leading to him contributing two songs to the 1998 animated film The Prince of Egypt, and he gained greater momentum with the 2000 release of Live in London and More…, which hit number one on the Billboard gospel chart on its way to platinum certification; it also gave him his only R&B crossover in the form of the single “We Fall Down.”

In 2001, McClurkin was ordained and founded the Perfecting Faith Church in Freeport, New York; he remained there as a pastor as he continued to pursue careers on-stage, screen, and record. That year, he also published Eternal Victim, Eternal Victor, a memoir addressing all of the turmoil of his youth as well as his faith. In 2002, he co-hosted the Annual Stellar Gospel Music Awards — it would be the first of six — and the following year he released his second album, Again; it went to number one on the gospel chart and was certified gold. Psalms, Hymns and Spiritual Songs followed quickly in 2004 — it was released on Zomba and would go platinum — and that year also saw the release of the documentary The Donnie McClurkin Story: From Darkness to Light. He appeared in the 2005 film The Gospel and the live album We All Are One (Live in Detroit) before he settled into a steady pattern of preaching and performing for the next few years.

McClurkin resurfaced in 2014 on RCA Inspiration with the Duets album — it debuted at number four on the gospel chart — and in 2016 the same label issued The Journey (Live). Early 2019 saw McClurkin issue the single “Not Yet,” which was inspired by surviving a serious automobile accident. A few more singles appeared throughout the year in advance of his next album, A Different Song, which was released in November.

Eric Roberson
As a GRAMMY Award-nominee, Singer, Songwriter, Producer and Howard University alum, Eric Roberson continues to break boundaries as an independent artist in an industry dominated by major labels, manufactured sounds and mainstream radio. Described as the original pioneer of the independent movement in R&B/Soul music, Eric has achieved major milestones in his career, from being a successful songwriter and producer for notable artists such as Jill Scott, Musiq Soulchild, Dwele, Vivian Green and countless others, to headlining sold out tours across the country.
Eric is celebrating over twenty years as an independent artist, creating “Honest Music” since 2001, which has afforded him the artistic freedom that isn’t typically offered in the mainstream music industry. Throughout 2021, Eric will be sharing his creative thought process and work he’s done on his last 13 solo albums. “I was more than willing to take less to enjoy my passion. I was fortunate to be rewarded with a career…a career that I never dreamed of.”
In June 2021, Eric will release a new single, entitled “Lessons”. Ironically, the song was recorded on the morning of his 12th wedding anniversary to his wife Shawn, with whom he credits as his inspiration. Eric says, “Being blessed to be with a woman who has had my back and who completes me, helped put me in a special mood to create”.
As Eric reflects on his new single release, he said, “I thank God for not having my temporary prayers answered. We have to have the heartbreak, the roadblocks and [other] things to not work out as planned. There’s a lesson in just being patient and swimming against the current to get to your destination. That’s the lesson for me. Knowing that there’s a reason for setback, for failure, for all of it.”
In 2020, we faced an unprecedented time that was challenging, but it also afforded Eric the perfect time of solitude from the world to immerse himself creatively. With this, he created a powerful album, entitled “Hear from Here”, a musical cry out to its listeners who longed for a sound of hope. This ten-song impromptu masterpiece was done in just four (4) weeks (March 2020). Roberson describes “Hear from Here” as an “act of service” to his devoted fans.
“Hear from Here” opens with songs like “Road to Recovery”, an up-tempo jam where Roberson lays it out on the line. “Shows cancelled…we have nothing to do but music. I hope to take your mind off things”. “Road to Recovery” and “Omaha” show off Eric’s ability to rap as well. The project closes out with its solo feature song, “Shining”, featuring fellow United Tenors member, Brian Courtney Wilson. This compilation takes you on a joyful journey spreading hope, love and inspiration. Roberson hopes that as fans listen to this album, they are inspired to dance, love and make the best of NOW!
In 2019, Eric was asked to be a Professor at the legendary Berklee College of Music in Boston. When asked about the position he stated that “It was an opportunity that I couldn’t refuse. I truly believe that at all times we are teachers and students. I not only love teaching the students but learning from them as well.”
While recording the trilogy album Earth, Wind & Fire in 2017, Eric created “The Process”, a forum in which he invites fans to navigate through his creative experience. It allows fans to listen and comment to unreleased songs, thereby being a part of the “process” of making music. “We are losing so much of the culture that went with listening to music. Letting the fans watch us create the albums was our way of bringing some of the old music culture back.” says Eric.
Eric was nominated in 2010 and 2011 for a GRAMMY award in the “Best Urban/Alternative Performance” category and continues to blaze trails unheard of as an independent artist. He was the recipient of the “Underground Artist of the Year” BETJ Virtual Award, with Rahsaan Patterson in 2008, and he became the first independent artist to be nominated for a BET Award in 2007.
Avery Wilson

A contemporary R&B singer and songwriter, Avery Wilson utilized early support from hitmaking songwriter/producer Sean Garrett, as well as exposure through the singing content The Voice, to land a contract with major-label RCA. Wilson hit Billboard’s Hot R&B Songs chart with his first official single, “If I Have To” (2015), and released a couple additional singles for RCA prior to going independent with FYI (2018).

Originally from Hamden, Connecticut, Avery Wilson began performing at open-mike events organized by his father and a few years later co-won a New York talent competition for teenagers. “Ringtone,” a demo his father circulated to local and regional radio stations, received some airplay and led to an association with songwriter and producer Sean Garrett (Usher, Ciara, Beyoncé). In 2012, Wilson self-released his debut album, On Top of the World, and reached a larger audience later that year when he competed on the third season of talent competition The Voice. His knockout-round elimination was preceded by renditions of “Without You” (David Guetta and Usher), “Titanium” (David Guetta and Sia), and “Yeah 3x” (Chris Brown) that led to a recording contract with major-label RCA.

“If I Have To,” a dramatic ballad created with Garrett, Rodney Jerkins, and Kirby Lauryen, was released as his first proper single in May 2015 and reached number 18 on the Billboard Hot R&B Songs chart. “Change My Mind,” featuring Migos, arrived a few months later. Following a Garrett-produced cover of Leon Russell’s “A Song for You” in 2017, Wilson went independent with the five-track EP FYI, released in 2018.