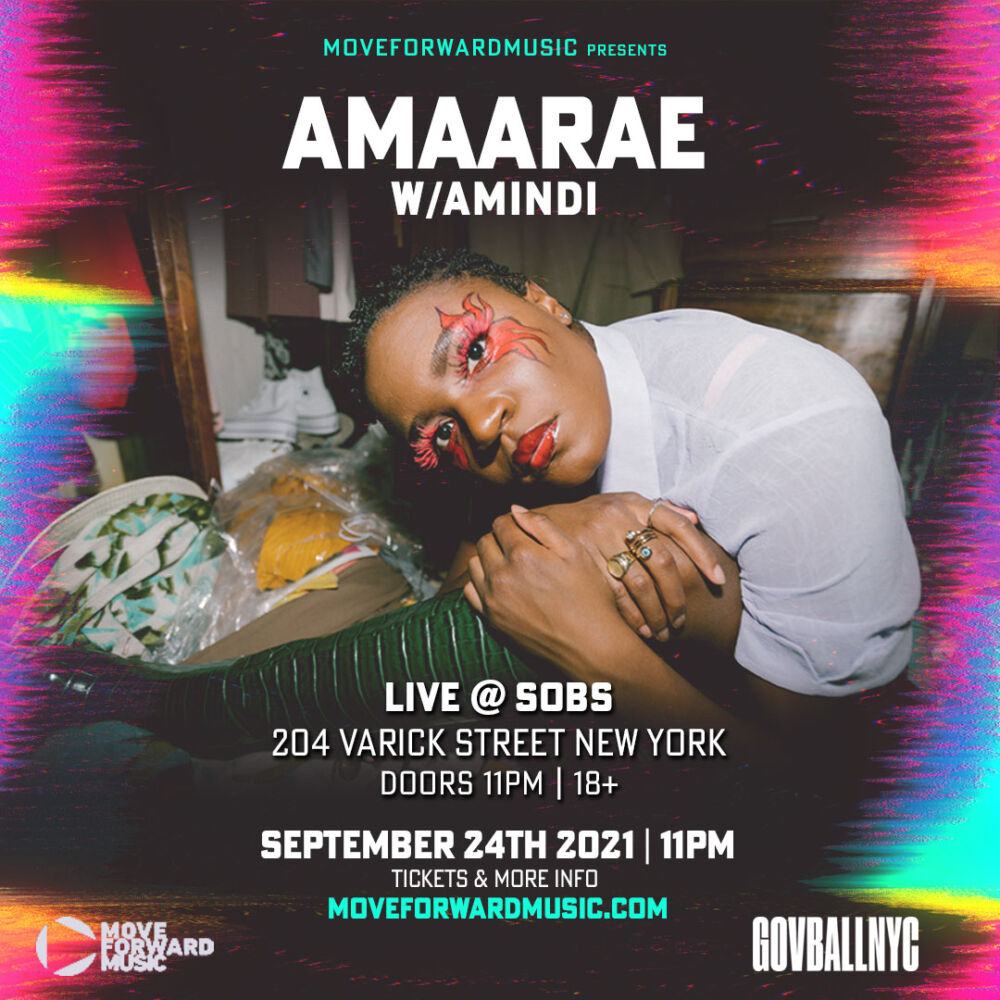 Amaarae’s recently released full length project titled ‘The Angel You Don’t Know’ is a sonic testament to her love for music and her capabilities as an artist. The genre blending project has received global recognition by the likes of Pitchfork, The Guardian, The New Yorker, BET, CLASH Magazine and many more, and is currently at the forefront of major playlists on Apple Music, Spotify, Amazon Music, Soundcloud and Audiomack.

Since winning ears and hearts in 2017 with her self-released debut album Passionfruit Summers, Ghanaian-American singer-songwriter, producer and engineer Ama Serwah Genfi has established herself as an exceptional and wholly unique force in an ever-changing musical landscape. Raised between Accra, Ghana, (where she attended high school), Atlanta, Georgia, and New Jersey, Genfi’s cross-cultural experience is the driving force behind the artist’s deeply experimental ethos and preternaturally emotive writing style.

Her Wande Coal featured “Spend Some Time” and sleeper hit, “Like It” (which ended up on Bella Hadid’s Instagram among other places), in 2019, were also fan favourites and received critical acclaim.

As a child, Genfi was an eternally curious, highly voracious consumer of all genres music. At home, she listened to the likes of Nina Simone and Aretha Franklin with her mother, but also discovered the swaggering and aggressive rap style of 50 Cent from a cousin. In Atlanta, she fell in love with the sweltering 808 and whimsy driven stylings of Southern rappers and would even go on to use the Sleepy Brown featured Outkast offering “SpottieOttieDopaliscious” as the inspiration for her 2019 appearance on Kojey Radical’s EP Cashmere Tears via the single “Sugar”.

During her time in New Jersey, where her current style choices were germinated by a merger of her innate black funkyness and the gothic influences of the predominantly semi-rural white environment in which she lived at the time, Genfi also experimented with her personal style –– vacillating between goth influences and street style; she also added alternative rock, punk and top 40 pop hits to her retinue. Yet it wouldn’t be until later in her career that the Afro-fusion songstress would lean into channeling the universality of pop lyricism into her own writing practice. Before Genfi’s metamorphosis into the singer-songwriter of today, she was sardonically penning her future into notebooks. One of her earliest songwriting efforts became the skeleton of her first song, a riff on R. Kelly and Usher’s single “Same Girl”, playfully retitled “Same Shanga ” by a then 13-year-old Genfi.

“Being in Ghana and seeing the DIY culture of everyone around me really inspired me. My mates didn’t necessarily have the resources to create what they wanted but they also didn’t let that stop them from figuring out how to do it,” Genfi shares of her high school years, where, in addition to selling her mixtapes to classmates, she threw herself into learning the ins and outs of the producing and engineering process, a skill that would come in handy when she later established a Ghana based label Golden Child Entertainment Ltd, her own independent record label.

Since then, the self-proclaimed “warrior princess” has truly stepped into her own, and in doing so, embraced the uniqueness of her artistic identity. Genfi’s instantly recognizable, mellifluous whisper-singing coupled with a compulsion toward pristine production (her cousin and fellow musician Dex Kwasi furnished her with Ableton Suite in 2009 and taught her how to use it), and the naked emotional honesty of her songwriting, make a powerful trifecta.