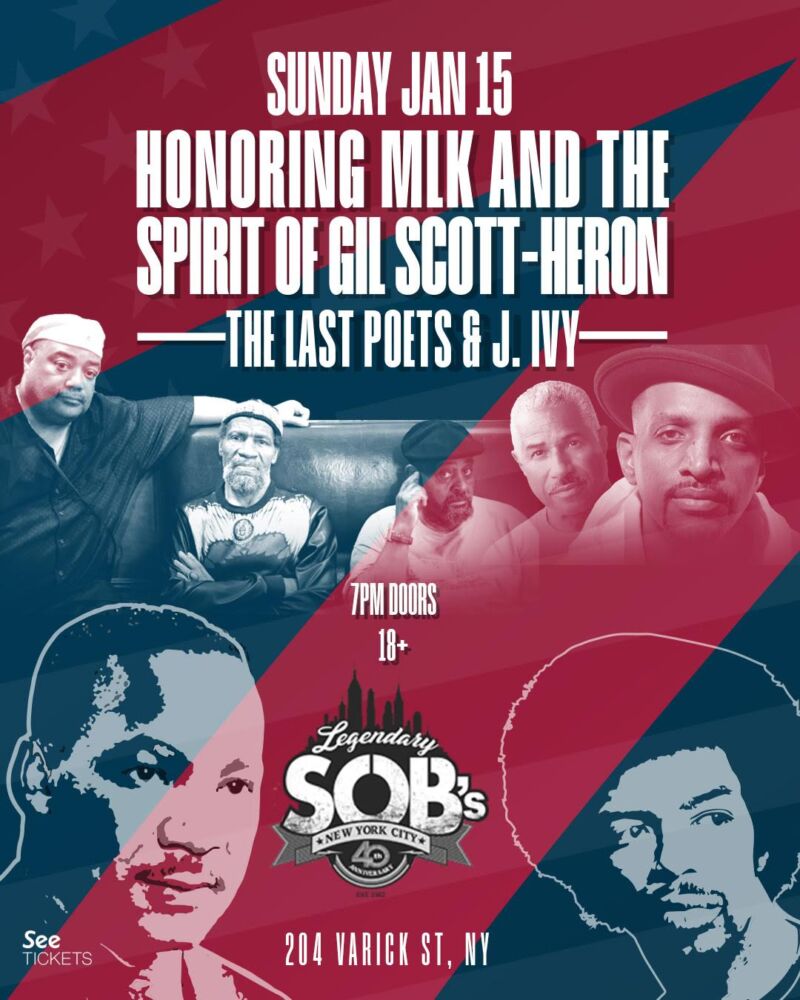 The Last Poets & J. Ivy: honoring MLK and the spirit of Gil Scott-Heron

Join The Last Poets & J. Ivy at the legendary S.O.B.'s as they honor MLK and the spirit of Gil Scott-Heron on January 15th.

Join The Last Poets & J. Ivy at the legendary S.O.B.’s as they honor MLK and the spirit of Gil Scott-Heron on January 15th.

The Last Poets are several groups of poets and musicians who arose from the late 1960s African-American civil rights movement’s black nationalism. The name is taken from a poem by the South Africanrevolutionary poet Keorapetse Kgositsile, who believed he was in the last era of poetry before guns would take over. The original users of that name were the trio of Abiodun Oyewole, Gylan Kain, and David Nelson.

After being commissioned by Michael Jordan & Deepak Chopra, J. Ivy wrote and narrated Beyoncé’s Black Is King Clio Award Winning promo for the 2020 Return of the NBA. He is also the Resident Poet for the foundation of famed visual artist Ernie Barnes. Fun fact, J. Ivy is who gave John Stephens the stage name John Legend, as told on Oprah’s Next Chapter.

J. Ivy’s latest works include his sixth album, The Poet Who Sat By The Door, his third book, Dear Father: Breaking the Cycle of Pain, and his fifth album, CATCHING DREAMS: Live at Fort Knox Chicago, which was nominated for a GRAMMY in the category of Best Spoken Word Album. He was the Halftime Entertainment for the New York Knicks MLK Day at Madison Square Garden and he appeared on NBC’s new hit show Grand Crew. J. Ivy was the lead writer for the Netflix documentary jeen-yuhs: A Kanye West Trilogy, which chronicles the career of the Hip-Hop megastar (Directed by: Coodie & Chike). J. Ivy is also featured on the 2022 EBONY Power 100 list.

In 2022, J. Ivy received a GRAMMY nominations for Best Spoken Word Poetry Album for “The Poet Who Sat By The Door”, and Best Gospel Roots Album for “The Urban Hymnal” by The Tennessee State Marching Band. After serving as the Recording Academy’s Chicago Chapter President he has also become the first poet to hold a Trustee’s seat in the history of the Academy.