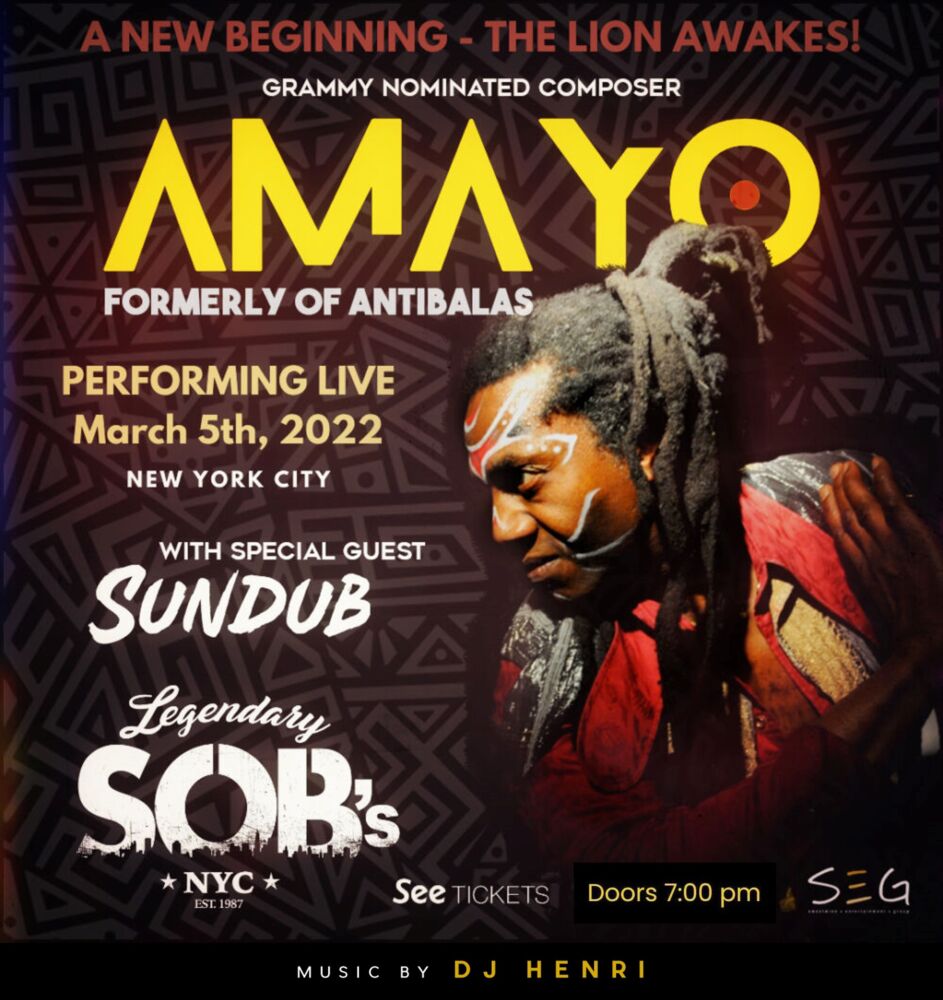 Amayo means: “If you don’t go, you never know!”

Former Frontman of Antibalas for 23 years, Amayo was credited for bringing Afrobeat to a global audience, leading it to become a genre of itself. He composed the GRAMMY-nominated “Fu Chronicles” album for “Best Global Music Album of the Year” 2020. It was the launchpad for Amayo’s solo career – where Kung Fu meets Afrobeat.

Amayo’s songs guide people through Kung Fu movements and stories of the Nigerian Edo & Ife Kingdoms. As an anointed Orisha “Awo” Amayo sings traditional Nigerian spirituals and stories that have been passed down in a sacred lineage. Amayo has been a senior master (Sifu) of the Jow Ga Kung Fu School of martial arts since 1982 and performs traditional Chinese Lion Dance as a salutation ritual to begin his stage performances to bring good fortune to the audience.

Founded in 1998, Amayo recorded 9 full length albums with Antibalas & performed 2000+ shows across 5 continents including 4 times at Carnegie Hall. Amayo also directed the Antibalas music video for “Fight Am Finish” on location in Nigeria & NYC, about an African American returning home via the slave route.

As his name means, “If you don’t go, you never know…” With a move across the country and the birth of his second child, Amayo decided to branch out on his solo career, one dedicated to his rich Nigerian heritage and Chinese martial arts teachings. The last Antibalas album, ‘Fu Chronicles’ was entirely his vision; the concept, the compositions, and the illustrations. His graduating thesis at Howard University was, “Art knows No Boundaries.” It was a concept he created first in 2000 with Amayo’s Fu Arkist Ra. Songs in the repertory include ‘Amenawon’, ‘Ascended Lion’, ‘Lion Awakes’ and ‘Happy Lion’.

The band carries the spirit of Kung Fu masters and philosophers of Asia, freedom fighters, the royal warriors of Edo & Ife Kingdoms, and Fela Kuti.And ‘Fu Chronicles’ sets the tone for the type of music you can expect to continue hearing from him. Amayo has hand selected some of the best musicians in the industry and reunited with one of Fela Kuti’s master drummers to bring you a new beginning with plenty of surprises in store!

“Antibalas is probably your favorite band’s favorite band. The 12-piece ensemble has been credited with introducing Afrobeat to a global audience.” – Soundcheck, WNYC

“[Duke] Ellington uses his remarkable abilities to dispel any lazy presumptions about genre and race. [Duke] Amayo carries on that mission.” – The Village Voice

“[Antibalas is] one of the few American bands that I fear.” – Questlove