Whether it’s Inner Circle’s “Bad Boy” chant or P Diddy’s “Bad Boy 4 Life”, one dynamic duo comes to mind; Will Smith and Martin Lawrence. They’re back in full effect with a third installment, creating a trilogy with the blockbuster movie. Thanks to Tidal and #Crwn, inside the legendary Apollo theater, fans were granted an intimate insight into how the movie was created.

The line started from the front of the Apollo Theater and wrapped itself around the corner of 125th in Harlem, USA. Freezing cold and having patience didn’t seem to be a perfect match, but if you could find a way to keep yourself busy on such a long line, faith would allow anyone in the building.

Fans being interviewed by Tidal when walking into the building gave the perfect atmosphere for networking. Whether you were taking pictures w/ a friend on the back drop, with Harlem Icon Dapper Dan, or Rap Radar’s B.Dot, everything was a build-up to seeing Will and Martin and hearing more about this long awaited film.

Three empty thrones sat on the stage. A producer comes out and announces to the hundreds of people in attendance to keep their phones on silent or off. Enter the stage was Crwn’s host Elliott Wilson. Dressed in a red Moncler bubble coat. You can tell Elliott Wilson was aware of Will Smith’s latest Moncler campaign.

Wilson welcomes Will Smith and Martin Lawrence to the stage and everyone in the Apollo was on their feet. Followed by rounds of applause and whistles from the generations of fans who’ve stuck with these two inspirational figures for decades. During the interview, it’s quickly revealed that Will and Martins’ real life chemistry is why this duo works so well on screen. The hilarious comedians shared amazing stories from on and off the set. 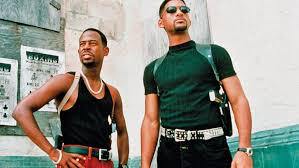 Bad Boys For Life did well in the box office when released in theaters. According to Business Insider, “It won the domestic box-office for three straight weekends. Bad Boys For Life is the highest-grossing film within the franchise making $148 million.”

In conclusion, if you haven’t seen Bad Boys For Life, you’re playing yourself. Knowing Will Smith and Martin Lawrence didn’t rush to give you a mediocre film is a confirmation that the film is worth every dime spent. Enjoy!