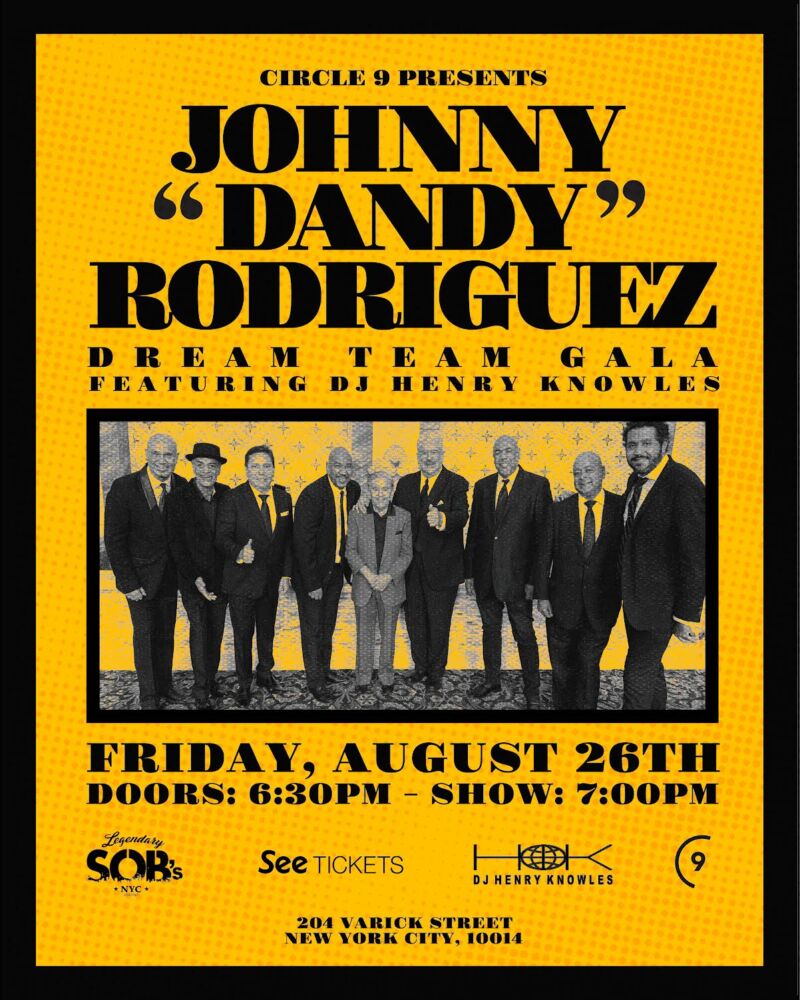 Experience Johnny “Dandy” Rodriguez and the Dream Team with DJ Henry Knowles on August 26th at S.O.B.’s in NYC!

Circle 9 Records is excited to present a brand new partnership with the legendary NYC music club S.O.B.’s to present Circle 9 artists in a world-renowned New York City music venue and unite the local music community around accessible music of quality and culture.

The Johnny “Dandy” Rodriguez Dream Team Gala is a special fundraising event to record the legacy of John Rodriguez, a world-renowned bongocero who is a salsa legend and performed and directed the Tito Puente Orchestra for more than 33 years. “Dandy” is a veteran of Tito Rodriguez, Machito, Willie Rosario, Celia Cruz, Fania All-Stars, Ray Barretto and virtually the entire pantheon of salsa’s pioneers.

All proceeds from this event will go to the recording of Johnny’s seminal “Dream Team” outfit, a band which captures the essence of the great descarga recordings from the Alegre and Tico record labels of the 1950s and 60s, and which has been one of NYC’s hottest salsa bands for 5 years. The recordings, scheduled for September 25th and 26th of this year, will be recorded as a single take and live with all members of the Dream Team present, thus capturing the essence and feel of the great Alegre All Stars, Tico All Stars, Cesta All Stars sessions.

The recording sessions on September 25th and 26th will be live-streamed, and available to subscribers of Circle 9. Gold and Circle 9 Vinyl Club subscribers will be presented with VIP tickets to this event.

Circle 9 is committed to bolstering the music community by providing musicians access to world class label service and world renown venues in which to perform, uniting the community at large around accessible music of culture and quality.